Sign in
En Ru Es
Send request and get quotations for your project.
OK
August 16, 2018
Back to blog

CCTV systems in educational institutions: not to replace, but to complement a person

There is a growing tendency in the world to fit out educational institutions with such security equipment as access control and closed-circuit television systems. This measure is focused on a requirement to provide safety and security to the students during their stay in the educational establishments in accordance with the Primary and Secondary Education and Training Act, as well as in line with other regulatory documents.

There are various ways to address the challenge of ensuring employee and student safety. It is possible to arrange a guard post with a security guard who will observe the happenings. This outdated method is familiar to all of us from the childhood, when we were met at the school entrance by a doorman or a security guard. On the other hand, one can employ state-of-the-art technical aids – CCTV and access control systems which get more widespread use every day, although they are still not used in all of the daycare centers, schools, vocational training establishments, and higher education institutions.

Unfortunately, people and technical aids cannot substitute one another. And it is not advisable to opt only for one or the other method of organizing security and ensuring safety. A security guard, doorman, or any other person who observes the situation and provides security to the people will not be able to monitor all the happenings without additional measures and tools. It is a sure thing that sooner or later he or she will miss an infringement or will not be able to prevent an unfortunate accident. On the other hand, there is a CCTV system. In case of proper installation of cameras and good choice of features, the video surveillance system will be able to monitor and record all events and make a notification about the events happening, but it is the user who can and must react to them. A CCTV system cannot become a self-sufficient security guard or defender, but it can be a highly effective tool which, on the condition of the competent work of its operator, is able to ensure maximum safety and solve several other tasks crucial for daycare centers, schools, vocational training establishments, and higher education institutions.

So, primarily, the CCTV system will help to ensure safety of the students and employees and integrity of the property.

The standard capability of any video surveillance system is displaying real-time video and recording it to the archive. Real-time viewing allows to organize 24-hour “here and now” visual surveillance of the premises, and the recording function enables the users to view and investigate the events that have already happened.

But bringing safety and security to the completely new level will require more than just installing the cameras and choosing the standard monitoring software. Imagine, for example, that there are 100 video cameras in one of the buildings of a university. The data from these cameras is displayed on a number of monitors, and it would be very difficult for a security guard not to miss an important event: some of those he or she will notice and react appropriately (just because his glance fell on the right monitor), but some will be certainly missed.

In respect to building a really helpful and efficient video security system, it is indispensable to add such technical aids as video analysis software features (intelligent modules). Each of them can independently detect the occurrence of an event using the video stream coming from the installed cameras and immediately send an appropriate notification to the system operator (a security guard, a doorman, a safety officer, or a policeman). Subsequently, the operator must react accordingly, resolving the situation and preventing any undesirable consequences.

Software solution developers offer dozens of different video analysis modules. It is possible to use all of them in CCTV systems of educational establishments, but it is not always viable. We have selected several intelligent modules that could be of most help in the educational institutions and will definitely justify the investment.

Application of video analysis modules in the CCTV system makes it really “smart” and useful. Relieving the operator from routine staring at the security monitors, the software with the intelligent modules lets him/her to concentrate on something really important that may require human intervention.

The CCTV software solution developers provide their users with yet another useful tool - remote access to the system from their mobile devices. It is a mobile application for iOS, Android or Windows Phone, which allows to view real time video stream from the system cameras or recordings from the archive on the screen of a tablet PC or a smartphone. This tool will be useful for security staff and managers of an educational establishment as well as for the parents of the schoolchildren or daycare center kids who want to be sure that their loved ones are fine. The flexible settings allow to adjust the access rights and viewing permissions as required, so that the parents see exactly what they need to.

Eocortex software can help to enhance a surveillance system with the above-mentioned intelligent modules and remote access functions. Its developers have implemented a variety of traditional machine vision algorithms as well as neural network technology, creating an efficient, fast and precise video surveillance software tool.

The efficient operation of a CCTV system depends not only upon its wide functionality, but also upon its user-friendliness and ease of use. In many cases the operators of a CCTV system are not highly-qualified IT engineers. They are security officers, doormen, guards, for whom the profound knowledge of computers and networks is not a core competence. But they are those who need to understand how to operate a video surveillance system and video analysis modules, and they require the system to be convenient and simple to use.

The creators of Eocortex software have managed to combine rich intelligent analysis functionality and user-friendly interface. This fact is noted not only by the end users of the systems, but by the recognized experts of the industry as well. For example, Eocortex software was independently tested by Benchmark, the distinguished British magazine, and was described as an easy-to-install and set up tool.

The efficiency of the intelligent video surveillance systems implemented in the educational establishments is confirmed by the numerous users – representatives of daycare centers, schools, vocational educational institutions, and universities.

Such confirmation can be provided, for instance, by the representatives of the Perm National Research Polytechnic University that uses 300 Axis и Hikvision IP camera video surveillance systemcontrolled bythe Eocortex software. The cameras are installed in the academic buildings, in the campus, and in the University dormitories. Alongside with the solving of safety and security issues, the system also helps in arranging the teaching and learning activities: it allows to monitor the process of holding the examinations and admission tests, as well as of defense of the theses.

A video surveillance system consisting of 100 Evidence IP cameras and Eocortex software with added interactive search and face detection modules is in use in School No. 25 of Tyumen City, Russia. The video cameras are installed at the entrance to the school, in the classrooms, corridors, and in the school yard to monitor the happenings and to provide safety and security to the school’s employees, students, and property. The interactive search module allows the security officers to investigate disputes by watching the videoclips archived by the system. The Face Detection module is used to monitor those who enter the school, and to promptly trace employees and students, as well as to investigate complicated happenings.

The British John Smeaton Community College installed 87 IP cameras in the classrooms and corridors, playgrounds, courtyard, and on the parking lot. Eocortex software chosen for the project helps to solve such very important tasks as ensuring safety and security of the college employees and students.

Providing safety and security to the students and employees is of paramount importance in the process of creating an infrastructure of educational establishments, and is also required by law. It is imperative not only to choose the right security tools, but to learn to use them in the efficient manner. Installing the CCTV systems and adding the intelligent modules will help to take safety of daycare centers, schools, vocational educational institutions, and universities to the higher level. Having said that, it must be understood that no system exists nowadays that could replace a human. But it can help to make his or her job many times more efficient and productive.

Summing up, when choosing a CCTV system, it is of importance to take the following into consideration:

These three simple rules will help you to set up a really useful and efficient video surveillance system dedicated to providing safety and security to the people in educational establishments. 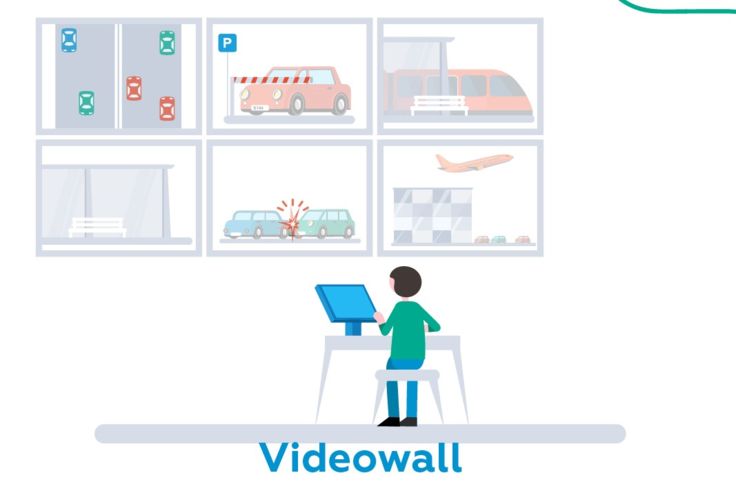 company news cases
We use cookies on this site to ensure the best service possible. Read more
Accept